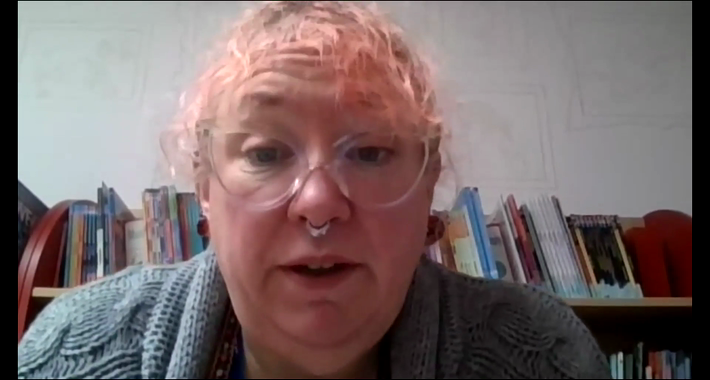 He threw up all over Miss Fazackerly’s skirt. He had been feeling sick ever since they left the main junction and climbed into the joggling, jolting little train for the last lap of their journey, but the sudden whistle had finished him. Such a noise – it seemed to split the sky open. ‘Enough to frighten the dead,’ Miss Fazackerly said, mopping her skirt and Nick’s face with her handkerchief. He lay back limp as a rag and let her do it, the way he always let people do things for him, not lifting a finger. ‘Poor lamb,’ Miss Fazackerly said, but Carrie looked stern.

‘It’s all his own fault. He’s been stuffing his face ever since we left London. Greedy pig. Dustbin.’

He had not only eaten his own packed lunch – sandwiches and cold sausages and bananas – but most of Carrie’s as well. She had let him have it to comfort him because he minded leaving home and their mother more than she did. Or had looked as if he minded more. She thought now that it was just one of his acts, put on to get sympathy. Sympathy and chocolate! He had had all her chocolate, too! ‘I knew he’d be sick,’ she said smugly.

‘Might have warned me then, mightn’t you?’ Miss Fazackerly said. Not unkindly, she was one of the kindest teachers in the school, but Carrie wanted to cry suddenly. If she had been Nick she would have cried, or at least put on a hurt face. Being Carrie she stared crossly out of the carriage window at the big mountain on the far side of the valley. It was brown and purple on the top and green lower down; streaked with silver trickles of water and dotted with sheep. Sheep and mountains. ‘Oh, it’ll be such fun,’ their mother had said when she kissed them good-bye at the station. ‘Living in the country instead of the stuffy old city. You’ll love it, you see if you don’t!’ As if Hitler had arranged this old war for their benefit, just so that Carrie and Nick could be sent away in a train with gas masks slung over their shoulders and their names on cards round their necks. Labelled like parcels – Caroline Wendy Willow and Nicholas Peter Willow – only with no address to be sent to. None of them, not even the teachers, knew where they were going. ‘That’s part of the adventure,’ Carrie’s mother had said, and not just to cheer them up: it was her nature to look on the bright side. If she found herself in Hell, Carrie thought now, she’d just say, ‘Well, at least we’ll be warm.’

What does that word mean?

Find out the meanings of :

Unfortunately not the ones with chocolate chips.

Some cookies are necessary in order to make this website function correctly. These are set by default and whilst you can block or delete them by changing your browser settings, some functionality such as being able to log in to the website will not work if you do this. The necessary cookies set on this website are as follows:

Cookies that are not necessary to make the website work, but which enable additional functionality, can also be set. By default these cookies are disabled, but you can choose to enable them below: